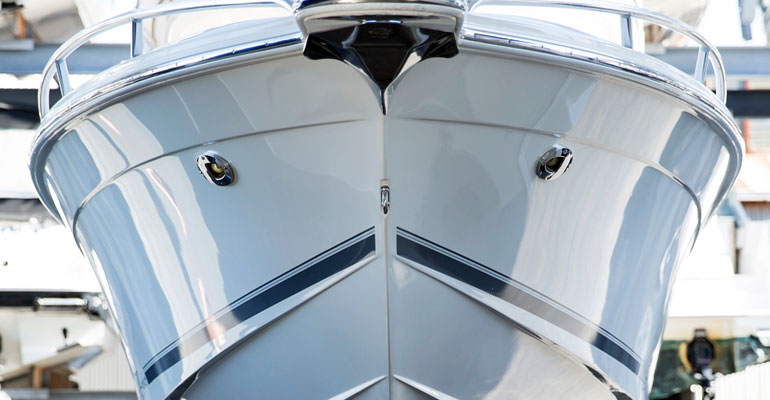 Hull moisture meters are considered reliable instruments to determine the amount of moisture levels within composite hulls, non-invasively, and to an extent, without causing any hull damage.

However, if given in the hands of an inexperienced surveyor who believes that meters always produce infallible results is a recipe heading for disaster.

Very few surveyors understand that the instrument is generally subject to varying and limitless conditions, for many of which there are no absolute answers, and thus the use of meters is part science and part skill.

With over 21,700+ varied assignments under our belt, it is prudent to understand that while moisture meters are reasonably simple to use, it is not without its caveats, and coupled with inexperience, it comes as no surprise that its incorrect use has led to far more unnecessary bottom repair jobs to fiberglass boats than all other causes put together.

At Constellation we understand that Moisture Evaluation is considered a core step during to conduct a pre-purchase survey for fiber-reinforced Yacht hulls, however under no circumstances should every reading of elevated moisture be construed as an indication of osmosis and the surveyor must take great care to corroborate finding by alternative methods. In other words, we are rather explicit in stating that there is no simple and direct correlation between moisture meter readings and hull condition, and we are not tempted to make a diagnosis based solely on moisture meter readings. While this may sound contrary to popular belief, let us look at why this is the case:
A composite boat hull is generally a mixture of a various material matrix reinforced with fiber glass, and due to the way these are molded, contain minute gaps and voids, which form the base of what is commonly known as Osmosis.
Water can diffuse into the laminate hull, collect within the voids, and over a period of time, and as a result of the internal build-up of water collection, the size of the internal voids tend to increase to an extent where blisters are formed, commonly known to compromise the structural integrity of the hull. These Blisters become the visible evidence of progressive hull moisture content and osmosis.
This is where Moisture meters are generally useful, however, there are some major considerations to account for before some surveyor is declared to a potential buyer – “The entire hull has elevated moisture reading”. (May we hastily add, there are not practices at Constellation Marine Services or their trained yacht surveyor.)


Testing on wet and recently hauled boat hulls:
We have significant and objective experiences that indicate a varied difference in Moisture readings between boats tested on haul-out, versus those tested when “dried out”. This is because of the very nature of the hull property of the yacht itself, which will produce aggregate results much lower than when tested immediately after it being hauled out.

It is thus prudent to appreciate that surveyors DO NOT rush into moisture measurements soonest a boat is out of the water, doing so will generally lead to obtaining elevated levels of moisture associated with residual wetness, and not in line with the actual condition of the Hull. End clients need to be informed that a certain level of time be made available for boats to be dried out before moisture meter measurements are initiated.

Very few surveyors understand the behavior of Gel coats. There are Gel coats that are prone to water absorption, and thus when tested will lead to higher than actual moisture results.
In an ideal situation, Hull moisture content testing is recommended to be conducted on surfaces stripped of gel coats and anti-fouling coating, however in reality sellers will be very reluctant to have their boats uncovered from the coating and it is reapplied once again.

Conducting only exterior testing
It is common fallacy to report on moisture results of tests carried out on exterior hull areas only, and this is often an erroneous modality adopted by inexperienced surveyors.
The correct procedure would be to corroborate readings with tests of the inner surfaces of the hull, which are not submerged, and out of the way of compartments such as bilge keels (with water trapped), freshwater tanks, compartments housing hydraulic equipment such as stabilizers, etc.

Conducting only exterior testing
It is common fallacy to report on moisture results of tests carried out on exterior hull areas only, and this is often an erroneous modality adopted by inexperienced surveyors.
The correct procedure would be to corroborate readings with tests of the inner surfaces of the hull, which are not submerged, and out of the way of compartments such as bilge keels (with water trapped), freshwater tanks, compartments housing hydraulic equipment such as stabilizers, etc.

It is important to thus understand that after inner hull areas, assuring that the surface is made clean and dry – will be a positive indicator of a wet core, than just assuming the readings tested over the exterior hull plating.

Low quality resin combined with excessive use of CSM Hypelon are generally considered as primary causes of blistering, it is thus important for the surveyor to have knowledge on the material and construction of the particular boat being surveyed.

So how is it to be done?
The International Institute of Marine Surveyors “Code of Practice for the Measurement and Analysis of the Wetness of FRP Hulls” recommends that "The surface must be carefully cleaned. A large number of random 4" x 4" areas must have paint or other coating removed down to the gel coat. The vessel should be out of the water for at least 24 hours. The minimum number of measurements must be equal to approximately, one per square meter (3.3 feet) or 50-100 on the average 35-40-foot boat".

Experienced surveyors will use a moisture meter in one hand, with a rubber hammer in another. The time-tested tapping acoustics produced between a wet and dry hull provides a clear indication of the status of the hull.
The only reliable method would be to have the hull surface tested by moisture meters from the INSIDE.
Care should also be taken to ensure that surfaces are clean and without salt residue, and this can be overcome by cleaning with a damp cloth.
We avoid reporting moisture readings as a percentage because that is basically inaccurate.

A major benefit of moisture meters is in locating the presence of water penetration in and around areas of hull fittings, and this provides a good indication of a POTENTIAL problem, and therefore an assurance that this could be fixed with a good quality marine sealant.